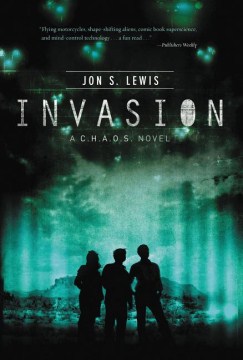 i really liked this book, i have never really been into science fiction books but i really enjoyed this one. the whole idea of creatures from other worlds and the comic books was a really good way to make the story original and more interesting.i think more people should give it a chance and it also has a really cool cover

this book is one of the best books i have ever read !!!!

Overall, Invasion was a fairly good book, but cutting a large section of the first chapter would have made it better. The scene at the C.H.A.O.S. training academy gave away too much of the mystery right at the start. Because Colt is then given a memory wipe, he spends a large section of the book trying to find out what we already know. The Phantom Flyer comic book and Trident Biotech were slightly confusing. At first, it is not clear if Trident is a well-known company or if it is more secret, and the Phantom Flyer at first seems like a slightly underground comic book, and it is not revealed until later that it used to be a major comic book and part of WW2 American propaganda. There were also a few potholes, including how Colt was able to fly the ultralight with no experience or instructions without crashing. There were some good and interesting parts to it, although cutting the training scene and explaining Trident and the Phantom Flyer better would have made it an even better book.

A fun book that's all science fiction. It's a really interesting look on WWII, as well. ;)

While the characters are a bit derpy in some instances, and I would say there are a few plot holes, this is a pretty good read overall. I wouldn't call it fine literature, but it's fairly well written, with an interesting central plotline, and it's just fun in general :)

I thought this book was extremely interesting, especially the part when Colt went to the academy for C.H.A.O.S. agents, and learned top secret information....but he has a memory wipe later. This book is no Hunger Games, but its still a fun read. I think more people should read this book, because it has great detail and a captivating plot.