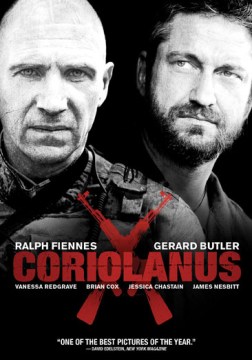 Some content below may have been reported by users for containing spoilers or offensive content. Learn More

I completely agree with Janice’s excellent comments about the film. We should be grateful to Ralph Fiennes for bringing this badly underrated Shakespearean tragedy to the screen, but both Vanessa Redgrave and Jessica Chastain delivered stronger performances than he did. Often transferring a Shakespeare play to another place and time falls flat, but here relocating Coriolanus to Yugoslavia in the 1990s worked very well. I wish more Anglosphere films were filmed in beautiful Serbia and Montenegro.

Outstanding. Ralph Fiennes brings to life this rarely staged or filmed Shakespeare play. Well cast and directed. This film clearly demonstrates how relevant this play is to us today. Shakespeares’ plays are timeless. Highly recommend.

Excellent Shakespeare adaptation by director and actor Ralph Fiennes. It's strange that people complain how violent this film was, as quite a lot of Shakespeare contains violent scenes- it's not a justifiable criticism. Also, people who try and graft " a modern sensibility " onto the immutable power of Shakespeare's works are another laughable variety of critic.

I was partway into the film before I found out that this is based on a play by Shakespeare. The excessive violence and the modern setting confused me, but, by the middle of the film, I began to notice that there was more to it than the presentation. I will need to give it another viewing.

Coriolanus is Shakespeare's best tragedy (an opinion shared by me and almost no one) especially if tragedy is defined as not only a personal loss, but a loss to humanity. Our hero is brave, intelligent, uncompromisingly honest, and unfortunately reared to despise people who are his inferiors. When his family and friends push him into democratic politics, a blind man could see the tragedy approaching. In my opinion, the definitive version has not been made, but Mr. Fiennes's is very good, and makes clever use of a Balkan War setting. However, his Coriolanus is prickly, unpleasant, even a little mad from the start -- he's supposed to be an appealing, noble figure as well, though many people have mixed feelings about him. It's hard to feel empathy for a fall of so short a distance. Brian Cox, Jessica Chastain, and Vanessa Redgrave give excellent performances, as usual.

This is is a 2011 British film directed by Ralph Fiennes, based on William Shakespeare's tragedy of the same name.
Set in contemporary times, Coriolanus becomes active in politics and seeks political leadership.
His temperament, however, is unsuited for popular leadership and he is quickly deposed, whereupon he aligns himself to set matters straight according to his own will.
The alliances he forges to accomplish his own will result in his ultimate downfall and death.
It is a visually more interesting and fascinating rendition than its traditional play.

The bard’s meaty prose seems perfectly at home amongst tanks and machine guns; it’s allusions to prideful downfalls, reckless rage, and weaknesses of the human heart timeless since the day they were first set to paper. Fiennes directs with the eye of an artist rendering both tearful exchanges and bullet-riddled showdowns with equal passion, and his cast seems to be more than up for the task even though Gerard Butler's garbled Scottish brogue proves to be the weakest link. Unfortunately this is not one of Shakespeare’s better plays and the somewhat facile plot, although engaging enough, rarely enthrals despite a host of superb performances. The clever twenty-first century touches are well placed however, with mass media taking on the role of Greek Chorus as the story unfolds. A must for every Shakespeare fan.

Really outstanding Shakespeare adaptation by Ralph Fiennes ( he directs and acts- great performance ). I found the subtitles helped me appreciate and understand the dynamic dialogue much better- I think people tend to forget how bloody funny Shakespeare is/was.

Once you get your head into dialogue, it is a really well directed and dramatic movie. Well worth watching and an excellent cast.

I was a bit sceptical of this because of its adaptation with the tools of late modern capitalist urban warfare (the imagery taken, it seems, from the Yugoslav wars of the mid-nineties), but really quite good; better by far than the BBC version from the series in the early eighties.

This DVD movie was entertaining and interesting but not one of my favorite for this year. Not too bad---good performance. Very predictable but still entertaining. I fast forwarded a lot but not all the way.

Some great acting, and a very interesting adaptation. However, be warned: this is Shakespeare meets Taratino. If you like Titus Andronicus, this is probably for you.

This is a really dumb movie. Who speaks shakespeare in Rome during a modern war. Confusing, boring, can't understand what they are trying to say. Then you stop caring after 30 mins. Turned it off. Don't waste your time.

Not a belly full of laughs ... but a lesser known gem by Shakespeare that works brilliantly in a modern setting.

If you are looking for an entertaining movie, this is not it.. Boring.

93
Visceral and visually striking, Ralph Fiennes' Coriolanus proves Shakespeare can still be both electrifying and relevant in a modern context.

Modernisted Shakespearean play of the tragic Roman General ... directed and starring Fiennes as Marcius. What an amazing performance ... and thank goodness for captions.

Not a fan. Shakes has beeen gone for about 400 years. Lets leave him out of this.

Boring - watched half an hour only.

For fear of being accused of being an idiot, I will only say that the dialogue does take some getting used to, but once you are sucked in it perfectly compliments the story and acting. I didn't love the movie, but it was much more enjoyable than I thought it would be once I realized that it was a literal translation of Shakespear. Skip it if the Shakespear dialogue doesn't get it for you (i.e. The DiCaprio version of Romeo and Juliet, Gibson's Hamlet, Fishburne's Othello). Well done, but not really my cup of tea.

Like others, I feel compelled to comment on Ravenheart's comment. I started reading Shakespeare around 9 or 10 not because anyone forced me to but because I loved the plots and the language. I love that he combined the most fantastic, original use of language with popular plots that recognized what grips us in human drama. Maybe you would prefer a McBeth to MacBeth, where everything is dumbed down to a miniscule attention span.