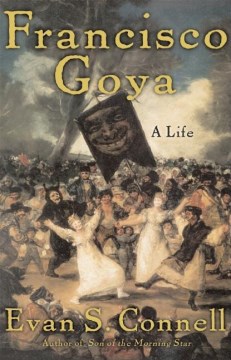 Baker & Taylor
Probes the mind of the Spanish painter, reconstructing the violent, repressive Spain he called home and charting his powerful influence on Western art.

Book News
Esteemed literary historian and novelist Connell ( Mr. Bridge, Mrs. Bridge, and Son of the Morning Star are among his works) takes as his subject the profoundly influential artist who changed Western art forever. There are no reproductions of the artist's work in this biography, but readers will no doubt seek them out. The bibliography is selective, yet still extensive, reflecting Connell's diligent research as well as his skill at distillation. Annotation ©2004 Book News, Inc., Portland, OR (booknews.com)

Blackwell North Amer
Goya was breakfast companion of the Queen and painter to the court, but his portrait of the royal family is so mercilessly unflattering that it's been wondered how he escaped strangulation. Yet his female saints and angels were beautiful, buxom majas - many thought them more suitable for brothels than churches. Goya was the portraitist of noble after silly, vain noble, and lover to the Duchess of Alba, the most desired woman of his age and one of the wealthiest - but his Spain was also one of blind beggars, cripples, cut-throats, lunatics, swaggering majos, flirtatious majas, dwarfs, bullfights, carnivals, massacres, and Inquisitors seeking the Devil. Much of it Goya saw through a glass darkly.
This inscrutable artist is a brilliant choice of subject for Connell, whose literary histories and penetrating novels have placed him among our greatest writers. With his famous wit, wry erudition and prodigious research, he brings to life an artist of unsurpassed imagination and his brutal times - Spain in the clutches of the Inquisition. Connell introduces a wealth of detail and a cast of comic and eccentric characters - dukes, duchesses, royalty, politicians and artists; as lewd and incorrigible a group as history has ever produced. As he charts the arc of Goya's career, Connell keeps pace with the tumultuous era and shrewdly sifts through two centuries of commentary on Goya's work, from Paul Claudel's dismay that Goya sought to avoid the eyes and the image of God, to Baudelaire's deadly accurate comment that he painted the black magic of our civilization.
Goya's protean talent sent connoisseurs barking in various directions. He was a master whose image of Saturn bloodily devouring his son is as unforgettable as his peerless rendering of the gentle light caught in the white satin gown of a countess. Most critics agree that Goya changed Western art forever, although the nature of his influence has been widely interpreted. Edgar Degas, for one, lamented that because of Goya he was condemned to painting a housewife in her bathtub. Connell has marshaled the vast array of contradictory thoughts on Goya, and conjured the artist, his art, and his times with fierce originality and imagination. The result is an unforgettable portrait from a literary master.

Baker
& Taylor
The author of Son of the Morning Star and Deus Lo Volt probes the mind of the Spanish painter, reconstructing the violent, repressive Spain he called home and charting his powerful influence on Western art. 75,000 first printing.