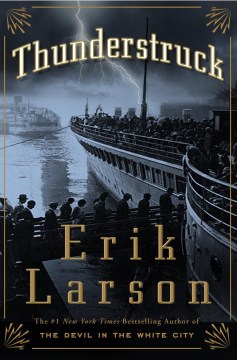 In Thunderstruck, Erik Larson tells the interwoven stories of two men&;Hawley Crippen, a very unlikely murderer, and Guglielmo Marconi, the obsessive creator of a seemingly supernatural means of communication&;whose lives intersect during one of the greatest criminal chases of all time.

Set in Edwardian London and on the stormy coasts of Cornwall, Cape Cod, and Nova Scotia, Thunderstruck evokes the dynamism of those years when great shipping companies competed to build the biggest, fastest ocean liners; scientific advances dazzled the public with visions of a world transformed; and the rich outdid one another with ostentatious displays of wealth. Against this background, Marconi races against incredible odds and relentless skepticism to perfect his invention: the wireless, a prime catalyst for the emergence of the world we know today. Meanwhile, Crippen, &;the kindest of men,&; nearly commits the perfect murder.

With his&#160;unparalleled narrative skills, Erik Larson guides us through a relentlessly suspenseful chase&#160;over the waters of the North Atlantic. Along the way, he tells of a sad and tragic love affair that was described on the front pages of newspapers around the world, a chief inspector who found himself strangely sympathetic to the killer and his lover, and a driven and compelling inventor who transformed the way we communicate.

Baker & Taylor
A vivid portrait of the Edwardian era recounts two parallel stories--the case of Dr. Hawley Crippen, who murdered his wife and fled the country with his mistress to build a new life in America, and Guglielmo Marconi, the inventor of wireless communication--as the new technology is used to capture a killer. 300,000 first printing.

Book News
Dr. Hawley Harvey Crippen murdered his wife and tried to escape London on a ship to America in the early twentieth century. He was caught in part due to the new invention of the wireless by Guglielmo Marconi, which was used on the ship. Larson draws from letters, memoirs, Scotland Yard reports, and other documents in telling the story and filling in its historical context of the Edwardian era. Larson is the author of Isaac's Storm and The Devil in the White City. Annotation ©2007 Book News, Inc., Portland, OR (booknews.com)

Baker
& Taylor
A portrait of the Edwardian era recounts two parallel stories--the case of Dr. Hawley Crippen, who murdered his wife and fled to America, and Guglielmo Marconi, the inventor of wireless communication--as the new technology is used to capture a killer.

If this is your first Erik Larson, put this book down and pick up Devil in the White City. If you loooooove it, you should like this book. I absolutely loved Devil and Beasts but this book starts out a bit slower with quite a bit of science and a character I didn’t relate to. It’s not a page turner but I enjoyed the gritty English history lesson and the true crime story.

Wayyy too much on the history of electricity/wireless technology and not enough on the murder plot. Super boring.

I preferred "The Devil in the White City" but this book was also interesting in its own way. Larson's device of intersecting two contemporaneous stories can be disjointed, but I do enjoy how they end up being connected, especially in these two cases.

I was more interested in the Crippen case than Marconi's, but I did enjoy hearing how important Marconi's invention was to Crippen's capture. All in all an enjoyable read.

Erik Larson's uncanny way of intersecting historical personalities and events always captivates me. Unlike "Devil in the White City" and "Dead Wake", which I previously read, Larson choses
to focus mainly two events: Marconi and establishment of wireless telegraphy and the pursuit
and solving of the Crippen murder--too seeming incongruous simultaneous events. The back
and forth narrative adds to the tension and frenetic pace to the culmination of each story. It reads like a good thriller.

After reading and really enjoying one of his other books "Dead Wake", I was looking forward to reading this one. After inching along and having to renew it once, though, I still hadn't read much of it. Too much jumping back and forth trying to follow what was happening in the story. I just took it back and decided to give it a try at a later date.

Lots of great period detail. The way he meshes the two story lines is so interesting.

An excellent book. The switches in themes were a little distracting but both themes were well researched and written.

Thunderstruck was great, although I'm sure some folks will be irritated by the focus on the development of wireless telegraphy distracting from the core story of the allegedly murderous doctor. This seems to be a pattern in Larson's books: the bulk of the book seems to focus more on tangentially related things. Still, I found all aspects of the book fascinating.

Excellent read. Historical drama and tying the two separate stories together in the end was extremely effective. Well written and a good page turner.

Interesting book, but flipping from one person to the other throughout, made it a little difficult to really find interest in either individual. His other books are better, in my opinion. That being said, this still was well-written and researched.