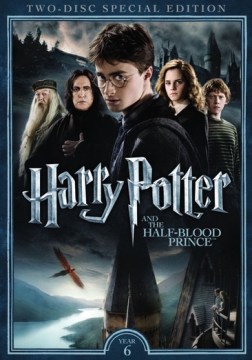 Harry Potter and the Half-Blood Prince

Harry Potter returns to Hogwarts for another year of schooling and learns more about the dark past of the boy who grew up to become Lord Voldemort. There was a time when Hogwarts was thought of as a safe haven, but thanks to Voldemort's tightening grip on both the Muggle and wizarding worlds, that simply isn't the case anymore.
Publisher: [Place of publication not identified] : [Publisher not identified], [2016]
Edition: Special edition
Branch Call Number: DVD HAR
Characteristics: 2 videodiscs (153 min.) : sound, color ; 4 3/4 in digital,optical,5.1 surround (English, Espanol),Dolby audio video file,DVD video,region 1
Additional Contributors: Radcliffe, Daniel 1989-- Actor
Watson, Emma 1990-- Actor
Grint, Rupert 1988-- Actor
Bonham Carter, Helena 1966-- Actor
Warner Home Video (Firm)

Dumbledore in final year’s grace,
coached Harry in his embrace.
Potions imbued with Horace,
memory was sluggish to surface.

From Burrow, Diagon, to Hogwarts,
Frolic to learn, jinx to charm, all sorts.
Here Lumos on Cave,
On Inferi to brave.

Son of Prince,
off parchment to evince.
Half blood or full menace,
next installment will convince.

Great movie and series. I just wish it was longer to include more things that happen in the book.

Another movie in the pantheon that ended up really helping the quality of the movies go way up. We get to see more of the wizarding world, the portrayal of Voldemort's past is not as detailed as it is in the book, which is a slight shame - because you see how much of a monster he is in the book, but the movie does something that is nice too, it humanizes him. It's a great change of pace. The death at the end really hit hard, and one of the last shots of everyone with their wands in their air paying tribute to that death - was beautifully done - an addition to the series that feels as if it was in the book all along.

The mystery, shock, and awe in this movie is unreal. There are so many revelations that are so important to the entire series. The story line is very entertaining and engaging, as it is full of action-packed adventure. There are so many little details and moments that are very impactful to the audience. As it is one of the later films in the series, the tone is darker, and there are definitely some somber moments. This story flawlessly starts Harry on his journey to end Voldemort. I highly recommend that you watch this movie. It will leave you in awe! 5/5
@PenelopeScriptor of the Hamilton Public Library's Teen Review Board

Harry Potter and the Half-Blood Prince is the sixth movie based on the novel of the same name written by J.K. Rowling. After the events of last year, extreme protection will have to be provided for Harry. Lord Voldemort is gaining more power by the minute terrorizing individuals and slowly trying to take over the government. However, Harry focus is also on his old potions textbook. The book contains written-in spells he has never heard of and instructions that are better than what the textbook had. He also spends the year trying to figure out who the owner of the textbook is, The Half-Blood Prince. Nonetheless, this will be a very interesting year for Harry Potter. If you enjoyed the Harry Potter novels, or the other Harry Potter movies I would recommend watching The Half-Blood Prince. This movie does not have as much excitement as the last to movies, but the information is important for the story. I would not recommend this movie to a younger audience. Overall, if I had to rate this movie, I, would rate it four out of five stars.
@SapphireReads of the Hamilton Public Library Teen Review Board

As Death Eaters wreak havoc in both Muggle and Wizard worlds, Hogwarts is no longer a safe location for students. Though Harry suspects there are new dangers lurking within the castle walls, Dumbledore is more intent than ever on preparing the young wizard for the final battle with Voldemort. Meanwhile, teenage hormones run rampant through Hogwarts, presenting a different sort of danger. Love may be in the air, but tragedy looms, and Hogwarts may never be the same again. I thoroughly enjoyed this movie, although, I was a bit disappointed that some important scenes from the books weren’t included (mainly the Battle that occurs and some of the Nymphadora scenes in the novel). Also, I didn’t fully care about the whole love triangle thing with Lavender, Ron, and Hermione. Other than that, I enjoyed learning about Voldemort’s past and how Professor Slughorn played a part in Voldemort’s horcruxes being created. Not my favourite movie from the franchise but still worth watching. Rating – 4/5.
@Average_Bookworm of the Hamilton Public Library's Teen Review Board

How is this the worst? Order of the phoenix is.

red_dog_18584 thinks this title is suitable for 11 years and over

black_dog_5203 thinks this title is suitable for 8 years and over

vaasu thinks this title is suitable for 13 years and over

burgundy_fox_61 thinks this title is suitable for 12 years and over

Rain_Mariz thinks this title is suitable for 8 years and over

blue_owl_398 thinks this title is suitable for 11 years and over

Slughorn: What do your parents do in the Muggle world?

Hermione: They are dentists.

Slughorn: And is this considered a dangerous profession?

Harry potter: "I'll give Slughorn the back the new one. He can't complain it costed nine galleons.

Professor Minerva McGonagall: That is a very serious accusation, Potter.

Harry Potter: It was Malfoy.

Arthur Weasley: Times like these, dark times, they do funny things to people. They can tear them apart.

Harry is shown bleeding in front of the Ministry of Magic, as the result of an attack that took place after the second-to-last scene of the previous film, Harry Potter and the Order of the Phoenix. Lord Voldemort is tightening his grip on both the Wizarding and Muggle worlds and has chosen Draco Malfoy to carry out a secret mission. Severus Snape accepts Bellatrix Lestrange's challenge to make an Unbreakable Vow with Draco's mother, Narcissa, to protect Draco and fulfill the assignment if he fails.
Harry accompanies Albus Dumbledore to visit former potions professor Horace Slughorn, who has gone into hiding. Slughorn agrees to return to teach at Hogwarts as Dumbledore tells Harry that Slughorn's return to Hogwarts is crucial.
Leaving Fred and George's new shop, Harry, Ron and Hermione notice Draco and Narcissa associating with Death Eaters in Borgin and Burkes. Harry believes Voldemort has made Draco a Death Eater, but Ron and Hermione are sceptical. On the Hogwarts Express, Harry spies on Draco, who hints to his friends that he does not plan to return to Hogwarts next year. Draco discovers Harry's presence and immobilises him, but Harry is rescued by Luna with her Spectrespecs

Emboldened by the return of Lord Voldemort, the Death Eaters are wreaking havoc in both the Muggle and wizarding worlds. Hogwarts, once thought to be a safe haven, may no longer be safe. Harry suspects that new dangers may lie within the castle, but Dumbledore is more intent upon preparing him for the final battle that he knows is fast approaching. Harry will have to help him uncover a vital key to unlocking Voldemort's defenses, a critical piece of information known only to Horace Slughorn, Hogwarts' former Potions Professor. Dumbledore manipulates his old colleague into returning to his previous post with promises of more money, a bigger office and the chance to teach the famous Harry Potter. The dark Forces finally attack the Astronomy Tower, Hogwarts due to the help of Draco Malfoy, who is a Death Eater too. It also tells about Dumbledore's through the hands of Severus Snape, who turns out to be a faithful sevant of Lord Voldemort!

Frightening or Intense Scenes: There are a few scenes that are scary, including iferi (creepy living skeletons) and blood.

Loading...
DPL owns a similar edition of this title.