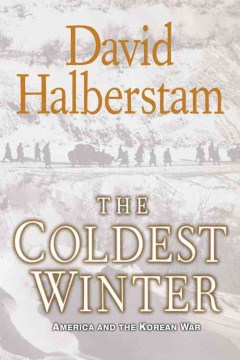 America and the Korean War

Pulitzer-winning historian Halberstam first decided to write this book more than thirty years ago and it took him nearly ten years. It stands as a lasting testament to its author, and to the fighting men whose heroism it chronicles. Halberstam gives us a full narrative of the political decisions and miscalculations on both sides, charting the disastrous path that led to the massive entry of Chinese forces near the Yalu, and that caught Douglas MacArthur and his soldiers by surprise. He provides vivid portraits of all the major figures--Eisenhower, Truman, Acheson, Kim, and Mao, and Generals MacArthur, Almond, and Ridgway. He also provides us with his trademark narrative journalism, chronicling the crucial battles with reportage of the highest order. At the heart of the book are the stories of the soldiers on the front lines who were left to deal with the consequences of the dangerous misjudgements and competing agendas of powerful men.--From publisher description.
Publisher: New York : Hyperion, c2007
Edition: 1st ed
ISBN: 9781401300524
1401300529

A really well written book on the Korean War. While written from the Western viewpoint, it provides good background, including the motives for all the major players (US, China, Russia, NK, SK, Nationalist China). The book provides an excellent summary of US relations with the Nationalist Chinese from th 30's to the 50's, and the role that, and their US advocates, plaued in the Korean War and the decisions that were made consequent to this political problem.

One of the other major themes of the book addresses Douglas MAcArthur. It provides a great deal of background on his life, accomplishments and motivations. It also highlight sboth his successes (helping Japan transition to the post-war world; the Inchon landings) and his many failures in this period of his career and foibles that played into what early became a disaster. While I think the book does as fair a job as it can, MacArthur does not come across well. Indeed, although this book was published in 2007, some of our current issues (dealing with America's place on the world stage; dealing with a powerful narcissitic personality in a position of great power; ascendent right wing power in the Republica party) either have some antecedents in the time period described by the book or have strange echoes now (MacArthur and Trump have some similar issues, although the General could at least claim some major successes in his career. The author described him as a talented individual with successes like his command in the Pacific War, resurrection of Japan, and Inchon under his belt, although hampered by narcissistic aspects of his personality). In the end, Harry Truman comes across as a brave president, who was willing to make a variety of hard decisions, in a tumultuous period in US and world history. One of these was the decision to remove MacArthur from the command. Although terribly unpopular at the time, as Truman himself anticipated, history seems to judge it as the right decision.
The book reads well. Chapters are not excessively long, and really do get right at the meat of the issue. Why not a "5 Star" rating? Most of the book deals with the first part of the war, from the antecedent issues, events and persons, until the time from 6/25/1980-2/15/1951. Granted, this is the time period in the war that had the real movement. But this leaves over 2 years (until the armistice in 1953), that are coverd effectively by a singel chaper (Ch. 51).

The book also fails to cover some important subplots, including the Air War (which did not go as favorably at times for the UN Forces, although, in the book, it is jsut taken for granted that it was always there and superior), revolts in the prison camps (a major embarrassment for the UN), the status of prisoners themselves (a major obstacle to the resolution of the fighting), and the negotiation process, including the seemingly interminable games that dragged the war on.

As an analogy, I would say the lack of detailed coverage f the last two years is somewhat akin to covering the First World War until stalemate set in during 1915 and then dismissing the rest of the war as not especially relevant. In addition, the book published in 2007, does not address the over 50 years of the ongoing war since the armistice. The author does address the effects of the Koren War in the section entitled "The Consequences," but more in the sense of the imapct on other policy decisions alter, especially the Vietnam War. The impact of the Korean War as an event itself is not addressed adequately. While 1950-1951 was "The Coldest Winter," the war goes on, its effects making headlines even today. The author may have been trying to restrict the size of the book by these omissions.

Having read all the notes, executive orders, presidential directives and legislation President Kennedy was involved with, I am certainly no fan of Halberstam and believe his book, The Best and the Brightest should not only not have been awarded a Pulitzer [how many good books really are, though?] but was garbage! Therefore, I am objectively saying that Halberstam pretty much gets his portrayal of MacArthur right - - a general who should have rightfully been courtmartialed for his participation in the slaughter of over 100 men, women and children at the Bonus March Camp except that his uncle was one of the richest men in America at that time, and a partner with J.P. Morgan. MacArthur was a classic American loser who caused the deaths of many. [Sally Denton's book, The Plots Against the President, provides the context of the atmosphere which allowed for, or led to, the Korean War and Eisenhower in the White House.]

His description of MacArthur's return to the USA (after being relieved of his command) is chilling. We came close to a coup.

Well written. A war, the US shouldn't have been in. MacArthur was oblivious to the soldiers under him. He saw himself as god and could do no wrong. Wrong he was.

Halberstam is a great writer, and I really wanted to like this one. I think I just wanted to learn more about Korea itself and the people on the ground; the focus here is more on the commanders and political forces that shaped the War. The book is great for what it is, but wasn't quite what I was looking for.

A complete, compelling, and enlightening history of the "forgotten war".