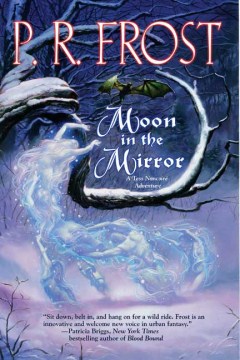 Moon in the Mirror

Penguin Putnam
Theresa Noncoir? was a successful fantasy writer. But Tess had another career as well, trained by the Sisterhood of the Celestial Blade Warriors to fight demonic incursions into our world. Teamed with a mischievous imp called Scrap, she's returned home after saving the world, only to discover that demonic trouble has followed her right to her own doorstep...

Baker & Taylor
Best-selling fantasy writer Tess Noncoire, who is also a martial arts master trained by the Sisterhood of the Celestial Blade Warriors to fight evil, returns home after saving the world, only to discover that trouble has followed her, when a Windago demon, garden gnomes, and a vengeful spirit make her life miserable.

Blackwell North Amer
Tess Noncoire is a best-selling fantasy writer. But what very few people know is that her novels are based on her own experiences as a martial arts master trained by the Sisterhood of the Celestial Blade Warriors to present demonic incursions into our world. Her partner in this fight is a strange little cigar-smoking imp called Scrap. Scrap can be rude, crude, and mischievous, but he's also cunning, intelligent, something of an expert on the demon dimensions and those who inhabit them, and he's devoted to Tess. Though he seems to small to be an effective warrior, he is growing stronger and a little larger with every demon they defeat. And when he transforms from imp to Celestial Blade, Tess and Scrap can hold their own against some of their deadliest foes.
Together the two have weathered demonic attacks and saved the world from destruction, but in the process they've made powerful enemies as well as unexpected allies.
Now Tess has returned home to New England to recover from her adventures and get some writing done, as well as put some distance between herself and the two men in her life - Guilford Van der Hoyden-Smythe, known as Gollum to his friends, who knows far too much about the Sisterhood of the Celestial Blade, imps like Scrap, and about Tess herself; and handsome, enigmatic Donovan Estevez whom she is fairly certain is not entirely human. But Tess soon discovers that home is not necessarily a haven, for trouble has followed her to her own doorstep.
Being haunted by a vengeful Windago demon whose mate she's killed will soon seem like the least of Tess' problems. First, WindScribe, a young Wiccan woman who vanished thirty years ago, unexpectedly returns. As if her presence is a catalyst, Tess suddenly finds herself under attack by what appear to be vicious garden gnomes but in reality are far more dangerous creatures. And to make things even more complicated, Tess' mother turns up with Darren Estevez, a Damiri demon with whom she's fallen in love. When Gollum and Donovan - who have both come to New England for reasons of their own - are added to the mix, Tess realizes her life is getting totally out of control. Torn between her feelings for the two men, suspicious of Donovan, whose "father" Darren has bespelled Tess' mother, Tess doesn't know who she can trust. What she does know, though, is that even with the help of Scrap, Gollum, and possibly Donovan, she'll be lucky to survive the next few days as she tries to protect her mother, fend off deadly attacks by Windago demons, solve the mystery WindScribe represents, and turn away an invasion led by the king of the "garden gnomes."