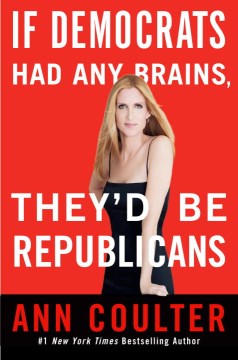 If Democrats Had Any Brains, They'd Be Republicans

Random House, Inc.
“Uttering lines that send liberals into paroxysms of rage, otherwise known as ‘citing facts,’ is the spice of life. When I see the hot spittle flying from their mouths and the veins bulging and pulsing above their eyes, well, that’s when I feel truly alive.”

So begins If Democrats Had Any Brains, They’d Be Republicans, Ann Coulter’s funniest, most devastating, and, yes, most outrageous book to date.

Coulter has become the brightest star in the conservative firmament thanks to her razor-sharp reasoning and biting wit. Of course, practically any time she opens her mouth, liberal elites denounce Ann, insisting that “She’s gone too far!” and hopefully predicting that this time it will bring a crashing end to her career.

Now you can read all the quotes that have so outraged her enemies and so delighted her legions of fans. More than just the definitive collection of Coulterisms,If Democrats Had Any Brains, They’d Be Republicans includes dozens of brand-new commentaries written by Coulter and hundreds of never-before-published quotations. This is Ann at her best, covering every topic from A to Z. Here you’ll read Coulter’s take on:

• Her politics: “As far as I’m concerned, I’m a middle-of-the-road moderate and the rest of you are crazy.”
• Hillary Clinton: “Hillary wants to be the first woman president, which would also make her the first woman in a Clinton administration to sit behind the desk in the Oval Office instead of under it.”
• The environment: “God gave us the earth. We have dominion over the plants, the animals, the trees. God said, ‘Earth is yours. Take it. Rape it. It’s yours.’”
• Religion: “It’s become increasingly difficult to distinguish the pronouncements of the Episcopal Church from the latest Madonna video.”
• Global warming: “The temperature of the planet has increased about one degree Fahrenheit in the last century. So imagine a summer afternoon when it’s 63 degrees and the next thing you know it’s . . . 64 degrees. Ahhhh!!!! Run for your lives, everybody! Women and children first!”
• Gun control: “Mass murderers apparently can’t read, since they are constantly shooting up ‘gun-free zones.’”
• Bill Clinton: “Bill Clinton’s library is the first one to ever feature an Adults Only section.”
• Illegal aliens: “I am the illegal alien of commentary. I will do the jokes that no one else will do.”

If Democrats Had Any Brains, They’d Be Republicans is a must-have for anyone who loves (or loves to hate) Ann Coulter.

Baker & Taylor
A compilation of hundreds of quotations by the controversial conservative spokesperson offers observations on Democrats, dating, environmentalism, religion, evolution, Reagan, terrorism, television, and hundreds of other topics.

Book News
Right-wing provocateur Coulter clearly delights in angering liberals with outré statements that not infrequently demonize her political opponents as traitors, unleash anti-Arab and other forms of naked bigotry, wallow in fantasies of violence against real and perceived political enemies, and generally engage in a strange form of political performance art in lieu of argument. Here she collects numerous short examples collected from media appearances and her voluminous writings, including jokes about how all liberals hate Christianity, Senator Ted Kennedy's Chappaquiddick scandal, Islam as inherently violent, and the need to profile "swarthy males." Those who enjoy Coulter's work will not find much new here, but may relive a mean-spirited chuckle or two. Anyone to the left of John Bolton, however, should probably just roll their eyes and ignore this book, unless they wish to aid Coulter's self-promotion of her own notoriety. Annotation ©2008 Book News, Inc., Portland, OR (booknews.com)

Baker
& Taylor
A provocative compilation of hundreds of quotations by the controversial conservative spokesperson offers never-before-published witticisms, insights, and observations on Democrats, dating, environmentalism, religion, evolution, Reagan, terrorism, television, and hundreds of other topics, from her interviews, speeches, and media appearances. 600,000 first printing.

Ann is the best at being a hateful person believe me everyone is telling me that and I am a stable genius! If you love to yell, hate minorities, claim to be a christian and have deranged thoughts that this country is for whites only than you will be sure to love this book!

Ann Coulter has made a career out of selling not just lies but bad and evil lies to willfully stupid people. If one were to take the exact opposite position to anything she writes, one would thus be able to attain positions actually supported by facts and evidence, two substances that act on Coulter as Kryptonite does on Superman.

This lady makes Sarah Palin seem like a genius.

If only you could demonstrate that academic achievement correlated with intelligent thought. I believe that I could make a stronger argument that indoctrination and fuzzy, feel-good thought creates the liberal bias observed on the modern campus.

This book is a jewel among all the liberal trash the library stocks.

Why did the Library wasted money buying 5 copies of this brainless trash? One should have been more than enough for documenting purposes...

Interesting premise, especially if you consider that there is statistically a much higher representation of University and College graduates in the Democrat party. In fact, statistically the higher a person's level of education the higher the probability that person will be Democrat. Sorry Ms Coulter those are the facts.