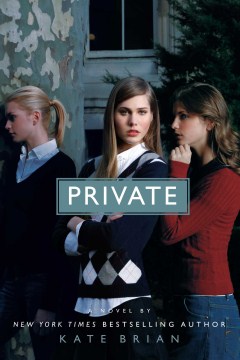 When fifteen-year-old Reed Brennan wins a scholarship to Easton Academy, she quickly discovers that the Billings Girls are the most beautiful, intelligent, and powerful group on campus, so Reed tries to become a member. But when she arrives on the beautiful, tradition-steeped campus of Easton, everyone is just a bit more sophisticated, a bit more gorgeous, and a lot wealthier than she ever thought possible. Reed realizes that even though she as been accepted to Easton, Easton has not accepted her she feels like she's on the outside, looking in.
Publisher: New York : Simon Pulse, 2006
Edition: 1st Simon Pulse ed
Series:
ISBN: 9781416918738
1416918736

Would I have known that the moment I picked off this book from the bookshelf, that it would become my favourite series one day? NO, but did it...Definitely! This novel was the start of my journey with the Billing Girls, a group of exclusive, superior, seemingly flawless girls who has shocking dark secrets...but we're getting ahead of ourselves here. The "Private" series is one of my most influential books, it is inspiring and teaches you the meaning of life. Ok, I was exaggerating but it does show you the importance of friendship. I was hooked from page one, and I couldn't stop until I finished all sixteen books! "Private" was whimsically fabulous, now that I wasn't exaggerating.
It all sets in motion by a new girl arriving in town, I know what you're thinking...Again?! Yes, but here's where this story changes its course of actions, instead of going "new girl meets popular girls then decided that being true to yourself is what's important", it goes in the unexpected direction, the road where it made this series unforgettable. Her name is Reed Brennan, this is her first day at Easton Academy, the first day of her new life. Entering September, Reed is a sophomore who is moving away to a new school. She wants more for her life than what she was given, so she's taking the chance at Easton to become a better, more successful version of herself. The fact that she can finally leave behind the mess of a family that awaits back home in Croton, Pennsylvania is just the cherry on top. But Easton Academy isn't all what she expected, Reed certainly didn't imagine herself getting hot and cozy with Thomas Pearson, the older and popular guy on campus. The nonstop talking, self-absorbent roommate, ok maybe that one was expected. Once the straight-As honour student, Reed suddenly finds herself falling behind in her classes, and then there's the Billings Girls. Noelle, the leader that very pacts need. Ariana, the poet, motherly one. Kiran, the model, the wild one. And Taylor, the smartest girl at school with a photographic memory who's also happen to be a total sweetie. They are the rightful quartet that lead the Billings Girls, these girls are everything Reed wants to be, and she'll do anything to be one of them... Anything.
"Private" is a perfect demonstration of how modern society functions in the setting of an elite high school, if you are into gossip girl and the clique, then you'd love this book! I like a good romance as much as the next girl, but that's just something special about stories that has the "Popular girls" element to it...We are all familiar with the desire of fitting in, and to be liked. Narrated in first person, it is easy to relate with Reed, from her embarrassing moments to her more confident ones. The other characters, like the leading ladies of Billings are all very intriguing, and they are the highlights of this series for me. Despite their often cruel behaviours, Brian makes them likeable, and believe me, it only gets better later on in the series. This first novel in the series is called "Private" because the Billing Girls are private about their lives and secrets, not only from outsiders like Reed, but also from each other as well. The book's main focus is on Reed's determination to break that barrier, that "privacy". At Easton Academy, their motto is "Tradition, Honor, Excellence." Tradition of the classic girl meets world? Check. Honor of the author's marvelous writing? Check. Excellence overall? Oh yeah.

I never expected so much mystery and drama from such a small book. With lots a teenage drama and spoiled little rich girls this starts an Attention grabbing series.

this book surprised me.. i ended up liking it more than i imagined.. onlly problem is that this series are too long .. but still worth reading. the endings of each book are intriguing and i can't help but read the next one.

I first picked this up and read it for no reason, thinking that i'd be bored after the first chapter. But it's an amazing book and i couldn't put it down!! It's really realistic with the cliques! I can't wait to read the others

I honestly fell in love with these books from the moment I picked up Private. I am currently eating up the series, a gripping story.

I wonder what happens next?

Nothing alarmingly original or provocative, a decent read considering the target audience though. I could see my daughter digging it when she's older.

I loved this book, it was amaaazing! I have read most of the series. I just can't seem to put it down. I can never seem to find the end though. Kate Brian, when are you going to end the book... SO much has already happened. What would you do next?

greaatt book, i love the story and i cant wait to read the rest of the series.

I loved this book!! Kate Brian is an awesome writer, I love all of her books, and I own all of this series! I can't wait for the last book!

red_fox_255 thinks this title is suitable for 12 years and over

mmae123 thinks this title is suitable for 16 years and over

Try searching for Private to see if DPL owns related versions of the work.