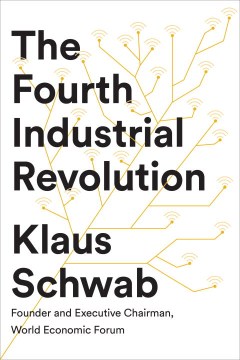 Random House, Inc.
World-renowned economist Klaus Schwab, Founder and Executive Chairman of the World Economic Forum, explains that we have an opportunity to shape the fourth industrial revolu&#173;tion, which will fundamentally alter how we live and work.

Schwab argues that this revolution is different in scale, scope and complexity from any that have come before. Characterized by a range of new technologies that are fusing the physical, digital and biological worlds, the developments are affecting all disciplines, economies, industries and governments, and even challenging ideas about what it means to be human.

Artificial intelligence is already all around us, from supercomputers, drones and virtual assistants to 3D printing, DNA sequencing, smart thermostats, wear&#173;able sensors and microchips smaller than a grain of sand. But this is just the beginning: nanomaterials 200 times stronger than steel and a million times thinner than a strand of hair and the first transplant of a 3D printed liver are already in development. Imagine &;smart factories&; in which global systems of manu&#173;facturing are coordinated virtually, or implantable mobile phones made of biosynthetic materials.

The fourth industrial revolution, says Schwab, is more significant, and its ramifications more profound, than in any prior period of human history.
&#160;
He outlines the key technologies driving this revolution and discusses the major impacts expected on government, business, civil society and individu&#173;als. Schwab also offers bold ideas on how to harness these changes and shape a better future&;one in which technology empowers people rather than replaces them; progress serves society rather than disrupts it; and in which innovators respect moral and ethical boundaries rather than cross them. We all have the opportunity to contribute to developing new frame&#173;works that advance progress.

Baker & Taylor
The founder of the World Economics Forum reveals an imminent, unprecedented technological revolution in all venues of the physical, digital, and biological worlds that is fundamentally changing how ordinary people live and work.

Book News
In this plain-language overview for general readers and others, author Klaus Schwab, founder and executive chairman of the World Economic Forum, describes transformative technologies that are poised to trigger the next economic and social revolution. In the first part of the book, he explains basics of emerging technologies that combine materials science, digital technologies, and biology, such as artificial intelligence, drones, DNA sequencing, 3D printing, nanomaterials, and smart factories. In the second part, he predicts the future impact of this new industrial revolution on business and the economy, social inequality, and individuals, at both the national and global scales. He points to coming changes in employment and the evolving nature of work, consumer expectations and new business operating models, international security, and the management of public and private information. Of special interest is a discussion of the impact of the new industrial revolution on income inequality and the middle class. The book also provides about 40 pages of appendices giving brief notes on the positive and negative impacts and future directions of 23 emerging technologies, such as implantable technologies, smart cities, driverless cars, Big Data, and artificial intelligence. Annotation ©2017 Ringgold, Inc., Portland, OR (protoview.com)

Baker
& Taylor
The founder and executive chairman of the World Economics Forum reveals an imminent, unprecedented technological revolution in all venues of the physical, digital and biological worlds that is fundamentally changing how everyday people live and work. Illustrations.

A good book, but I kept noticing that the writer doesn't have the concept of Techno-Cycles, or for that matter any notion that the economy is cyclic and that there are four major contributors to that cyclic activity, the Hog, Business, Baby Bust (Maybe) and Tehcnocyles at 2, 5 -7, 20, and 40 years.

His analysis is therefore weakened greatly, but it is still a good jumping off point.

I read this in support of my moral philosophy in process Das Nerdal that posits that the limiting factor on economic production is now the supply of nerds.