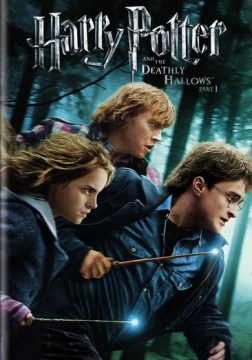 Harry Potter and the Deathly Hallows

Part 1 begins as Harry, Ron and Hermione set out on their perilous mission to track down and destroy the secret to Voldemort's immortality and destruction--the Horcruxes. On their own, without the guidance of their professors or the protection of Professor Dumbledore, the three friends must now rely on one another more than ever. But there are Dark Forces in their midst that threaten to tear them apart. Harry's only hope is to find the Horcruxes before Voldemort finds him.
Publisher: [United States] : Warner Home Video, 2011
ISBN: 9780780661653
0780661656

Good movie although rather gloomy.

I think this one is good but I like part two better I watch it when I like 11 years old and I was fine so yeah you could watch it when you are 11 but that just depends on if you are ok with violence.

When I read the other books, I personally felt like this was a bit of a ripoff and i know Rowling can do much better. There is a bad scene, and I think they sometimes overreact. There was definitely suspense, but lots of violence. DEFINITELY NOT SUITABLE for kids under 12 years. I would prefer the other movies but this I would give a 3 star.

Great adaptation of the book!

"Hermione Granger and that time I let Harry decide where to go and we ended up lost in the Forest of Dean for five months, before saving his %^& at Hogwarts." Literally, that's the whole first part of the dang movie. I get why they split it in two and it had to happen, but part one was super dull and the second part with battle was beautifully shot. Parts 1 & 2 make a good movie (Dobby got cheated though, SPOILER, his death is nowhere near as impactful as it is in the book), but I personally feel let down - but the battle at Hogwarts scene was really good but incomparable to what I had built in my imagination from the great description of the book. I mean SPOILER you don't see this in the movie, but Slughorn (A Slytherin) comes back to help the fight, along with all the family members of the children who had stayed behind to fight at Hogwarts. I wish I could have seen that on the big screen, I wish I could have seen the parents/elder siblings of these young kids stuck in Hogwarts running to join the fight for their world.

The seventh movie in the magical series of Harry Potter. One of the most thrilling and gripping books yet! Once you pick it up you will never want to put it back down! Great read and would fully recommend it to those who enjoyed the other books. With danger around every corner, and at every step Harry and his friends take, you cannot stop reading. My favorite part of this book was Harry and his friends searching for the final Horcruxes to defeat Voldemort for the last time. My favorite character in this book is probably Hermoine as she is a quick thinker in dire situations and helped them out of a lot of troubles. This book mainly is about finding a way to stop Voldemort to end his reign of terror, and the journey of finding the Horcruxes and stopping him. @Spencer_Pan of the Teen Review Board at the Hamilton Public Library

Harry Potter and the Deathly Hallows is a meaningful, action-filled adventure. As Harry searches for Voldemort’s horcruxes, many challenges arise. You will be eagerly watching at the edge of your seat! This film definitely takes a darker tone, and there is the loss of some beloved characters. This movie is very important for the story’s development, along with each character’s personal growth. If you are a fan of the Harry Potter series, you definitely have to watch this movie! The new revelations and occurrences are necessary for Harry’s conclusion, and the film flawlessly leads into the battle of the next movie. 5/5
@PenelopeScriptor of the Hamilton Public Library's Teen Review Board

Harry Potter and the Deathly Hallows part one is the second last Harry Potter movie based on J.K. Rowling’s novels. Harry now has to prepare to leave the Dursley’s for the last time. He will be moved to burrow where he will be safe up until Bill and Fleur’s wedding, then Harry, Ron, and Hermione will have to leave. They will go on their last adventure together outside the walls of Hogwarts searching for all of the parts of Voldemort’s soul, hiding in horcruxes. Harry was given instructions by Dumbledore right before he died that all parts of Voldemort’s soul must be destroyed in order to kill him. With nothing but their wands and a few textbooks, the golden trio will be tested like never before. I recommend watching this movie if you read the Harry Potter novels or have watched all the previous movies. Many plot changes have been made in the movie. I would not recommend a younger audience watch this movie as it is very dark and scary. If I had to rate this movie, I would rate it four out of five stars.
@SapphireReads of the Hamilton Public Library Teen Review Board

The build-up is needed for part 2 but lacks entertainment is some places.

red_skunk_65 thinks this title is suitable for 10 years and over

vaasu thinks this title is suitable for 13 years and over

blue_panda_4979 thinks this title is suitable for 11 years and over

JasonO2006 thinks this title is suitable for 12 years and over

black_falcon_167 thinks this title is suitable for 12 years and over

Other: about all of the above

Violence: Battles, action and violence. Lots of it.

Frightening or Intense Scenes: WATCH OUT ALOT OF FRIGHTING SCENCS OR VIOLENT PICS

This movie is nearly as good as the books which is saying something.
The movie is about Harry, Hermione and Ron going on a hunt for 6 Horcruxes, a task set by Dumbledore. on their quest, they find out some weird things about Harry and his extended family, they also find out about a Horcrux Voldemort never meant to make...

The 7th Movie in Harry Potter series, showing the Dark times on the rise in the Wizard World, and the infiltration of Ministry.Harry meanwhile is on the hunt for Horcruxes, 7 objects(actually 8) that have pieces of Voldemort's soul in them, which makes invicible(immortal).

The 7th Movie in Harry Potter series, showing the Dark times on the rise in the Wizard World, and the infiltration of Ministry.Harry meanwhile is on the hunt for Horcruxes, 7 objects(actually 8) that have pieces of Voldemort's soul in them, which makes invicible(immortal).

A delightful End to an excellant piece of movie series History.

"You're looking fit!" ~Hagrid
"Yeah, he's absolutely gorgeous. What do you say we get undercover before someone murders him." ~Mad-Eye Moody