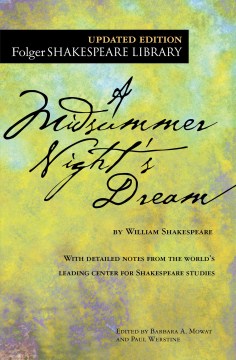 BEFORE READING: MY OPINION IS PROBABLY DIFFERENT FROM YOURS (I don't like the fantasy genre ( - _ - ; ) )
.
Fantasy genre. The storyline is very shallow and I didn't learn much. However, it does take lots of analysis to get the gist of the story. Maybe an enjoyable read for fantasy lovers, but this book is definitely not for me. Also, incoming 8th graders to Hopkins Junior High should read this. It's on the curriculum.
.
Edit: What would've been funnier is if Demetrius first saw Lysander before seeing Hermia.
.
.
Follow me on aclibrary.org if you like my book reviews :D The five seconds it takes to follow me will make me so happy :DDDDD

I absolutely loved A Midsummer Nights Dream because of how it takes on the element of fantasy. In some of Shakespeare’s plays he puts in mythical characters like witches but they never stick around for the majority of the play whereas in A Midsummer Nights Dream, one of the main themes is fantasy. Another reason I love this play is because its other main theme is romance. Although there’s romance it isn’t just about one couple which I liked. Shakespeare did something different by using four people to play out the theme of romance instead of two. I really admired that it was different and made it more unique compared to his other plays. 4/5
@Celine of the Hamilton Public Library's Teen Review Board

I purchased the Oxford Classics version, rather than the Student's version. My copy has a roughly 100-page "Introduction," which is exegetical, and can hardly be considered introductory. Please, please, read the play first. The story is enjoyable, and the few stumbles over archaic words are resolved by the extensive footnotes. Unlike one previous commenter, I found the last act an interesting look at the society of Elizabethan England.

I enjoyed reading this play, by William Shakespeare. I think that the plot was interesting and creative, and I liked the incorporation of magic into the theme. There was definitely a lot of humor and chaos in the story, which is why it is classified as a comedy. I appreciated the lighter tone, and thought that Shakespeare did a good job at developing the characters, especially in so little time. I think that there were many interesting aspects to this play, and would recommend it to anyone who enjoys reading Shakespeare, especially comedies. The ending is satisfying, and leaves the audience content. @PenelopeScriptor of the Teen Review Board at the Hamilton Public Library

A Midsummer Night’s Dream, by far one of my most favourite Shakespeare plays. Any avid Shakespeare reader can note that plays’ are usually split between two roads: comedy and tragedy. And of those two roads, there are two different endings: marriage for comedy and death for tragedy. A Midsummer Night’s Dream was definitely a comedy, and one of my favourites too. What, with donkey heads and fairy queens and kings, and of course, the famous love square, it made for a very interesting play. And for anyone that is wondering how hard it is to read the English in Shakespeare’s time, it really isn’t that hard! I would say that A Midsummer Night’s Dream is a great play to start at. It has humour, is easy to read compared to Hamlet, and was a pretty short play. Overall, I really did enjoy the touch of fantasy in reality and the constantly changing love square between some of the main characters. A must read! @thesoundofcolour of the Teen Review Board at the Hamilton Public Library

A Midsummer Night’s Dream is an entertaining comedy that takes the reader on a magical adventure with a group of amateur actors, two pairs of lovers, and mischievous fairies. Brought together by coincidence, the characters not only add to their own problems, but also complicate things for others. Throughout the night, the sudden turn of events, dramatic irony, and exchange of words between characters help to create a comical atmosphere. As morning comes near, the story untangles itself, satisfying both the characters and the reader. Despite being a comedy, the play delivers significant messages pertaining to love, marriage, and obedience to parents. Overall, A Midsummer Night’s Dream is a must-read for those who enjoy reading Shakespearean comedies! 5/5
- @VirtueofReading of the Teen Review Board of the Hamilton Public Library

A Midsummer Night's Dream is the first Shakespearean play I read, and personally I think that it is the perfect introduction to Shakespeare. Due to the fact that it’s a comedy, it isn’t as heavy or serious as his other plays such as Macbeth or Romeo and Juliet. In this funny and eventful play, the main characters all end up falling for the wrong person due to the mistakes of Shakespeare’s well-known and beloved character “Puck.” I would totally recommend this play to anyone who wants to start reading Shakespeare for the first time! Rating 4/5 stars.
- @reginaphalange of the Teen Review Board at the Hamilton Public Library

This is the second of Shakespeare's comedies that I have read, the first being THE TEMPEST. As far as Shakespearean comedies go, it's not my favourite; it all seems too much about the folly of love and doesn't say too much here or there about anything, really. I appreciated THE TEMPEST more and, frankly, I'd rather read Shakespeare's tragedies than his comedies. Still, if I can deduce anything from this play, then the principal point is that true love and happiness seem unreal, a fallacy concocted up by magic. So, the happy ending and marital bliss and all the giggles are merely . . . nothing? Ultimately, I don't know and I don't care. The sourness of that message, as that is all I can extract from what is ultimately a huge farce, is far more pessimistic than anything in the tragic downfalls of King Lear, Othello and Desdemona, Romeo and Juliet, or any of the like. Sorry, Willy, this one's just not for me.

Humans can not control human. William Shakespeare wrote “A Midsummer Nigthś Dream” in 16th century. The play start in the court of Theseus, where a father and daughter are having an argument. As a result of the argument, the young lover run to the forest where…..

[Spoiler Alert]
The first Shakespearean work I have read in its full form, this play was charming. I was actually impressed that I could understand a good deal of it, lol. XD Anyway, the premise of the four "lovers" and their messed up...love triangle?(ish) thing going on among them was entertaining. I especially liked when Lysander and Demetrius (both under the influence of a love potion) threw themselves (metaphorically speaking) at Helena's feet, when they both really loved Hermia. And then Hermia finds out what's going on and Helena is convinced they're all playing a cruel prank on her. That was probably my favorite scene in this play. Although I felt the ending left a bit to be desired...it's Shakespeare. So I'm not gonna complain too much. ;)

This is a superb, annotated, foot marked, and analyzed version of the play from the very best source --- The Oxford Press. If you really want to understand the plot, the historical background, and the language of the play, then check out this copy.

Another one of many great Shakespearean plays. This is the play I like best because it's light and funny. It plays around with the concepts between illusion and reality. Truly entertaining! :D

HELENA
Oh, when you get her angry, she’s a good fighter, and vicious too. She was a hellcat in school. And she’s fierce, even though she’s little.

"When they next wake, all this derision
Shall seem a dream and fruitless vision."

And though she be but little, she is fierce.

Love looks not with the eyes, but with the mind,
And therefore is winged Cupid painted blind.

The course of true love never did run smooth.

qianhaha thinks this title is suitable for 16 years and over

britprincess1ajax thinks this title is suitable for 15 years and over