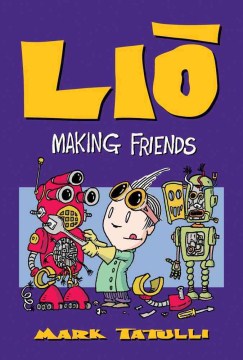 A curious young scientist and comic book fan, Lio is the defender of the defenseless and the inventor of a legion of zombie bunnies. Lio is joined in his day-to-day exploits by his exasperated and sleep-deprived father, a pet snake named Frank, a squid named Ishmael, and various imaginary robots and creepy, crawly monsters. Within this humorously macabre framework of sarcasm, parody, and high jinks, sidesplitting laughter abounds-- all without so much as a word.
Publisher: Kansas City : Andrews McMeel Pub., [2013]
Copyright Date: ©2013
ISBN: 9781449425586
Characteristics: 224 pages : illustrations (some color) ; 23 cm

What do you do when your kids is obsessed with monsters and zombies? The best answer is to introduce him to Lio. Lio is the expressive silent type. His hair along with his actions make a statement kids will recognize, especially since there are no real words for kids to read. They can use their imagination as they examine the illustrations. The character Lio is creative, in one scene he attaches plunger cups to his shoes and climbs the walls, therefore hiding from his brother. Lio builds robots and snuggles with his pet cobra Frank. His imagination teeters between genius and the macabre. One particular scene demonstrates bullies making fun of a kid who has a hunchback. Lio rescues him and utilizes him as an assistant for his snake. One can only guess where this scenario will lead. Another scenario demonstrates Lio reaching out to aliens via radio waves, and once they arrive he trades a tricycle for their ship. Strangely humorous, kids and adults will love Lio and his ingeniously unusual humor and antics.

Try searching for Liō to see if DPL owns related versions of the work.