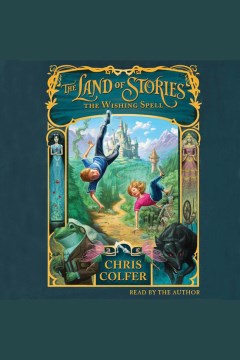 The Land of Stories

Alex and Conner Bailey’s world is about to change in this fast-paced adventure that uniquely combines our modern day world with the enchanting realm of classic fairy tales. The Land of Stories tells the tale of twins Alex and Conner. Through the mysterious powers of a cherished book of stories, they leave their world behind and find themselves in a foreign land full of wonder and magic where they come face-to-face with the fairy tale characters they grew up reading about. But after a series of encounters with witches, wolves, goblins, and trolls alike, getting back home is going to be harder than they thought.
Publisher: [S.l.]: Blackstone HBG, 2012
Edition: Unabridged
ISBN: 9781619691261
Characteristics: 1online resource (1 sound file (09hr., 00min., 56sec.)) : digital
Additional Contributors: Colfer, Chris - Narrator
cloudLibrary

This book, by far, is my favourite book ever. It’s a magical read and even more magical adventure. I bought this book after reading it at the library; I’ve owned the book for over 8 years now. I laugh every time I read it but also can’t wait to read the next page. Whenever I feel down, bored or just need a book to read, I alway come back to the Wishing Spell. I would recommend this book to anyone who wants a little magic book of happiness in their lives. It’s sure to become a dog-eared, worn-out favourite in a few years. 5 out of 5
@BookLover278 of the Hamilton Public Library's Teen Review Board

Very Very interesting book. Cant wait to read all the books in this series.

I love this book! I love how it has all of the different fairy tales combined and how the author uses such good descriptions. I couldn't put this book down and overall, it was a spectacular book! I would recommend it to EVERYONE!

This old playaway only works on the right side and the left side rattles on and off.
The story plays completely though. Interesting play on fairy tales giving characters personality, it starts a series of 5 'books' that should be played in order. Great escape for even adults.

The Wishing Spell is an entertaining twist on the well-known fairytales, as the author Chris Colfer is able to effortlessly interconnect them. It features twins Alex and Connor Bailey as they adventure through the Land of Stories while simultaneously working their way back home. I would recommend this for elementary and middle schoolers (I read this in 5th grade myself). There’s a lot of interesting world building in this first book, but through later books the author adds on more ideas and problems, which helps it expand on the world that he describes. Colfer also brings up side-stories that will help make the reader wonder how they will ever be resolved. If you read The Wishing Spell and enjoyed it, binge-reading the entire series is a good idea!

This book is about twins being given a fairy-tale book by their grandmother on their birthday but they had no idea their fairy tale book would give them passage into a world where all fairytales are real. The rest of the story is about how these two siblings try to find their way home while meeting fairy-tale characters and escaping the Evil Queen. It goes into fairy-tale characters' backstories and what happened after. It gives a new twist on fairy tales and makes you think about alternate realities where stories aren’t really stories. I really enjoyed the integration of different fairytales I grew up reading about being in one book. This book took me on the journey of a lifetime. It transported me to another world and it made me feel like I was there alongside the characters.

The Land of Stories: The Wishing Spell, by Chris Colfer, is an imaginative and unique story with relatable main characters, named Alex and Conner. The two characters are twins but are not very similar. Alex is very studious and loves learning,
while her brother Conner is much better at making friends. Through their grandmother's storybook, Alex and Conner are transported into a world full of fairy tale characters. In this world, however, it seems only a few years have passed
since the typical endings of the stories. For example, Cinderella is about to be a mother, and Goldilocks is a wanted criminal. Alex and Conner travel through this new world with the help of a notebook that has instructions on finding
a wishing spell to get back to their world.
This book is amazing. From the amazing plot to the relatable characters and dialogue, this book is a page-turner. I would recommend this book to kids in third grade and older. I would be able to reread this book over and over again.
I think anyone can enjoy the story since the author is amazing at creating a unique world.

land of stories is probebly the best siries i have ever read. i pretty sure the only bad thing about this book is that its not 10,000 pages😊

In the book, “Land of Stories: The Wishing Spell”, by Chris Colfer, two twins named Connor and Alex go on an adventure to another world. The twins, who grew up reading, breathing, and surrounded with fairy tales, are astonished to find that the fairy tale book that their grandmother gives them, the “Land of Stories”, is actually a portal to the fairy tale world. When they travel inside, they find themselves in the fictional world that they grew up knowing so much about. But their exhilaration quickly turns into panic and fear when they realize that they are lost in a world they don’t recognize at all. Then they realize that they don’t know how to get back either! They quickly meet new friends, and come face-to-face with lots of familiar characters. Then, they learn that the only way back is to complete the wishing spell, which requires certain items that belong to certain fairy tale characters. Going on a scavenger hunt all over the fairy tale world, they have lots of fun and encounter lots of danger. This book is great, because it contains iconic fairy tale characters, and develops them further, also talking about what happened after their original story. This book is very humorous, and is recommended for anyone looking for an entertaining read. Surprising revelations along the way bring suspense and action into the story, and the author does a good job making the story flow. All the fairy tale characters are put together in a way that makes sense. Recommended for people ages 10 and up.

Alex and Conner Bailey are twins who receive an unexpected gift from their grandmother. At first, it may seem like an ordinary book but they soon discover that it’s a portal to a fairytale world beyond anything they could ever imagine!

This book is amusing and it has well-known characters in a unique story. I would recommend this book to someone looking for a lively adventure through a fantasy world.

navy_fox_409 thinks this title is suitable for 10 years and over

pink_butterfly_11996 thinks this title is suitable for 7 years and over

Anika_Singh thinks this title is suitable for 8 years and over

ttbooknerd10 thinks this title is suitable for 8 years and over

red_monkey_4122 thinks this title is suitable for 7 years and over

black_swan_250 thinks this title is suitable for 10 years and over

orange_dolphin_752 thinks this title is suitable for All Ages

:D Watch this video for a summary! https://www.youtube.com/watch?v=ANCfXOA5FZ4 And also definitely go to http://thelandofstories.com!

Alex and Conner two twins have always been interested in fairy tales, however things take a turn in their normal lives when on their birthday their grandma gives them a book that turns out to be a portal to another world; so they go on a dangerous and daring adventure in the other world full of fairy tail creatures piecing together clues of how to get out and how it is possible they are there.

When Alex and Conner's Dad died they never thought they'd be happy again. Then on their 12th birthday they discover things they never dreamed possible. With a new adventure around every corner you'll never expect what to find.

A daring adventure in a world of fairytales

The book is about two kids that fall into a storybook and go on an adventure.

This book is about two twins who have lost their beloved story-telling father and end up with his book of stories, they get lost in the book and need to figure out how to get home. Will they make it?

the first book in the series!!! Alex finds out the book her grandmother gave her is the a portal that can be opened through magic. Now the twins are on a quest to find a wishing spell to go home, but is someone else on the way to find the spell too?

Twins Alex and Conner Bailey accidentally travel into their grandma's old book and end up in the land of stories. together they face lot's of challenges collecting the wishing spell items that might be able to bring them home. but the evil queen seems to be after the spell too and she will do anything to keep them from using it.

In The Land of Stories, Wishing Spell, twins Alex and Conner receive a heirloom book from their Grandmother, who is usually away travelling the "world" with her older friends. Little do they know the book contains a magical world. When Alex falls through the book, her brother jumps in too and they journey around the magical land. Through meeting a talking frog, the wicked witch, and Cinderella, The Wishing Spell is an amazing book i would recommend to any fantasy-lover.

"PERSONAL?! You making me an outlaw and stealing my best friend wasn't personal?!"

“But what the world fails to realise is a villain is just a victim whose story hasn't been told.”

"A Villain is just a victim whose story hasn't been told." -The evil queen. Most inspirational quote ever.

"Alex imagined what it would be like to be a character in her own fairy tale: the forests she'd run through, the castles she'd live in, and the creatures she'd befriend."

"Courage is something no one can ever take from you".

"Someday you will be old enough to read fairy tales again."-C.S.Lewis

"I was just thinking," Conner said. "Alice went to Wonderland after she fell into a rabbit hole. Dorothy's whole house was scooped up by a tornado that dropped her off in Oz. The Narnia kids traveled through an old wardrobe… and we ended up in the fairy-tale world by falling through a book."

Loading...
DPL owns a similar edition of this title.